Blog: The Best Chance for All

Policy settings matter to equitable student outcomes. This will be demonstrated on World Access to Higher Education Day (WAHED) with the launch of the research report The Global Higher Education Equity Policy Barometerand The Best Chance for All, a proposed policy statement for student equity in Australian tertiary education developed through the Student Equity 2030project.

In Australia, the reform agenda to widen participation in higher education over the past seven years, namely the introduction of demand-driven funding and the Higher Education Participation and Partnerships Program (HEPPP), has been a demonstrable success (Zacharias, 2017). It has broken the trend of stagnant participation of people from low SES backgrounds in higher education and contributed to significant increases of students from other equity groups, notably Indigenous students and those with disability. However, inequity continues to be a concern, and many groups remain significantly underrepresented in higher education (Brett & Harvey, 2017).

Australia has had a very effective policy framework in A Fair Chance for Allwhich was launched as part of the Dawkins reforms of higher education and implemented from 1990 (Harvey, Burnheim & Brett, 2016). There is much to celebrate in the contributions of equity policy, practice and research to the success of the Australian higher education system and its impact on social wellbeing and economic productivity.

However, it is almost 30 years since the core framework for equity was first defined and a decade since the last major review of the role that equity plays in Australian higher education was undertaken through the Bradley Review of Higher Education. It is time to take stock and rethink the vision for student equity in the context of the contemporary Australian higher education system, society and economy.

Since 1990, there have been significant changes in the size and make-up of the Australian population which hit 25 million in August 2018, some years ahead of original projections. Skilled migrants and international students added substantially to population growth. In addition, structural changes to our economy are starting to emerge as a result of digital disruption and the 4th industrial revolution. These changes may necessitate new approaches to supporting the transition of young people to the labour market as well as a national strategy for reskilling workers displaced by automation and the digitisation of the economy. 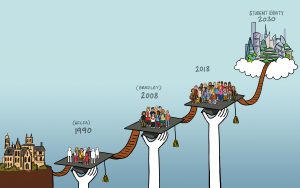 Australian responses to structural economic changes have always included increasing university access and participation by underrepresented communities. This has previously been achieved through the establishment of outer-suburban and regional universities in the 1960s and 1970s, the introduction of the Higher Education Contribution Scheme (HECS) in the 1980s and demand driven funding post-2010. Between 2009 and 2017 domestic undergraduate enrolments increased by 36 per cent, from 588,016 students in 2009 to 801,080 students in 2017 (Department of Education and Training, 2018). A pressing question now is how we might position student equity in higher education as an integral component of a comprehensive national response to the current challenges.

The National Centre for Student Equity in Higher Education (NCSEHE) established the Student Equity 2030 project to develop a strategic long-term vision for student equity in Australian tertiary education in close collaboration with key stakeholders across the sector and beyond. Student Equity 2030 included an expert workshop, a webinar, discussion paper, written submissions and national roundtable conversations. Information and links to these documents and other artefacts are available on the NCSEHE website: https://www.ncsehe.edu.au/publications/student-equity-2030/

We look forward to sharing the outcomes of this national conversation about student equity policy and strategy with you during the Australian WAHED hub conference on 28 November 2018.